Released in 2019, the book Gender Queer has become a lightning rod for controversy in America. The illustrated novel by Maia Kobabe talks about their experiences wrestling with and discovering their true self, while questioning gender and not fitting into the binary of gender.

Recently, however, the book has gained ample amounts of controversy. The debate began because a few of the book’s illustrations depict teenagers engaging in sexual acts (the book is written for teenagers) and others make references to sexual fantasies. Confusingly, a page discussing the author struggling with their first period also became part of the debate, with parents calling it “offensive” despite there being nothing offensive about women having a period.

According to ABC Raliegh-Durham (one of the cities where the book has been removed from library shelves), a group called “Moms for Liberty” applauded the libraries for removing the book, saying, “We applaud Wake Public Libraries for taking a stand against obscene and sexually explicit materials available to our children in public settings. We are confident that the Wake County Public School System will follow suit. While we support the rights of all genders and those in our local LGBTQ+ community, we do not support obscene, profane, offensive and sexually explicit materials of any nature to be made available to minors without express parental consent.”

However, as one student in Chicago explains, things arent that simple. CNN covered a debate held between both sides in the Chicago suburb of Downers Grove. One of the students, a Junior named Julia Hanson, said, “We have already been stripped of our innocence completely and one copy of the book in our library makes no difference to that…After all, most kids have never checked out a book from our library.”

This has led activists and civil rights groups to question why this book, which shares intimate, detailed, and yes, sometimes uncomfortable information about being young and queer, has become the biggest target in literature. After all, as Ms. Hanson said, most kids and teenagers don’t even go to libraries or read books (Personally, I didn’t either when I was young. it wasn’t until I discovered books that pushed boundaries like Gender Queer does, that I realized that reading could be interesting). 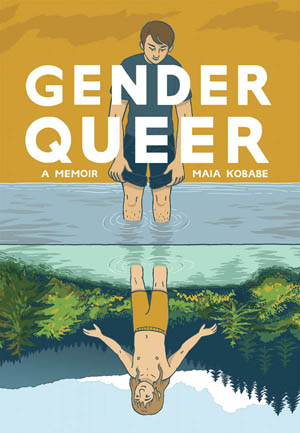 Sadly, Gender Queer is just one of many books about race and LGBTQ issues that are being challeged. While one could argue that Gender Queer has visually explicit content, that arguement goes out the window when taken into context. According to The Guardian, The American Library Association (ALA) has seen a massive rise in books being challgned, usually as an organized effort by right-wing groups, that almost always center around books that focus on LGBTQ themes and racism, even by literary legends like Toni Morrison.The article quotes ALA director, Deborah Caldwell-Stone who said, “We’re seeing censorship to impose particular agendas, representing particular political or religious beliefs. It’s really disheartening.”

Conservatives have gotten used to using “religious freedom”, “decenecy” and “morality” as ways to silence those around them. It’s become a witch hunt against anyone who thinks differently from them. While looking at the banning of Gender Queer as a standalone case, it could seem as though “decency” may be the reason, but when taken into context, it becomes obvious that Gender Queer is just one of the many books Republocas are trying to ban in order to silence those around them, clearly going agaisnt the First Amendemrent rights that all Americans should have.

In order to help young people discover new books, diverse voices, and topics that might pertain to them, the Brooklyn…