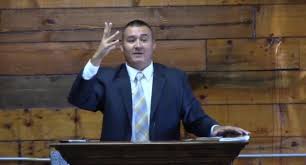 A Texas minister known for his disgusting comments immediately following the Pulse Nightclub massacre has resigned from his position. Baptist Donnie Romero made headlines when he praised the gunman that murdered 49 people and called the victims of the shooting “perverts.” He also made headlines in 2009 calling for the assassination of former President Obama.

Now, the minister took to social media to resign from his post and apologized to his family for using dugs, gambling, and even paying for sex with prostitutes. Romero founded the Stedfast Baptist Church, a network of independent Baptist churches. He initially made the announcement to parishioners by telling them that he had not “been ruling my house well.”

“Basically, the major sin involved was being with prostitutes, and then there were also marijuana and gambling that were also discovered,”  another pastor, Steven L. Anderson said in a video about the minister’s resignation.

He gained notoriety in 2009 for saying in a sermon that he had prayed for the death of President Barack Obama, and was criticized by the Anti-Defamation League in 2014 for what it called his “history of anti-Semitism.”

Both churches are vehemently opposed to homosexuality and have been classified as hate groups by the Southern Poverty Law Center, which tracks extremism in the United States. The website of Faithful Word Baptist Church describes homosexuality as “a sin and an abomination which God punishes with the death penalty.”

“This network is not coming out of nowhere, it’s not like it’s one little church in one little place with some guy who liked to go to prostitutes,” said Heidi Beirich, a researcher at the law center. “It’s a network of congregations across the country with this guy who preaches a — I don’t want to call it a theology because it is so hateful, but who preaches that gay people are destroying the country.”

Mr. Romero and Mr. Anderson were among a small group of extreme Christian conservatives who were widely criticized in 2016 for praising Omar Mateen, the gunman who killed 49 people that year at Pulse nightclub, a center of gay night life in Orlando. Mr. Mateen said at the time that he was acting in the name of the Islamic State.

More than 50 additional people were injured in the attack. In a sermon shortly after the shooting, Mr. Romero said he hoped they would die, too.

In the sermon, which was posted to YouTube, Mr. Romero told congregants that gay people were all pedophiles and that he hoped the injured would die of their wounds “so that they don’t get any more opportunity to go out and hurt little children.”

“I’ll pray to God that God will finish the job that that man started,” he said, referring to Mr. Mateen. The video of the sermon has since been removed from YouTube.