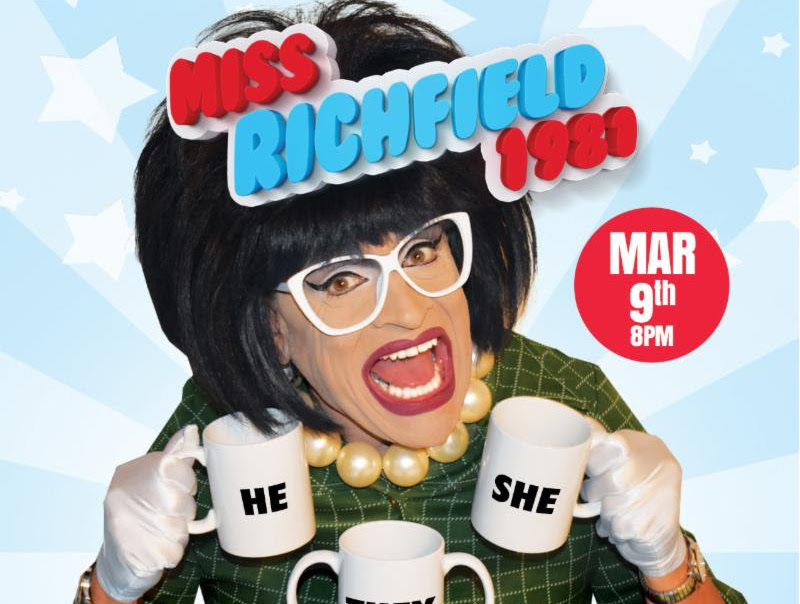 In her all-new show “Gender Fluids,” Miss Richfield will attempt to find non-binary answers to our increasingly complex world! With all new music, new videos, new costumes, and a healthy heap of help from the audience, this new show promises to celebrate all the genders—both old and new.

Dedicating her life to the friendly citizens and responsible merchants of her hometown of Richfield, Minnesota (“where butter is a spice and gravy is a beverage”), Miss Richfield 1981 is fast becoming one of America’s national treasures. Her live performances have received critical acclaim, with the New York Post declaring Miss Richfield 1981 “the must-see act in Provincetown,” and Twincities.com noting, “In these divided times, Miss R is tonic–and gin–for the soul.”

According to the organizers: “What makes Miss Richfield unique is the combination of midwestern sensibilities with an off-the-page humor, stemming from her creator, Russ King. A former journalist and Minnesota native, King created the character with a rich history that begins with her life-long goal of being crowned beauty queen of her first-ring suburb. Miss “R” has recently purchased a refurbished Apple IIe computer and entered the digital age. She invites you to join like her on Facebook, follow her on Instagram, and watch her on YouTube. And be sure to visit her at missrichfield.com where she keeps a calendar of events and shares words of wisdom, such as her favorite Bible verse: ‘It’s important to be nice, but it’s nicer to be important.'”

You can purchase tickets for the March 9 show at the Sunshine Cathedral here.