This Black History Month, the National AIDS Memorial will be holding a virtual viewing of the AIDS Quilt to honor Black lives lost to AIDS. The exhibition is set to coincide with National Black HIV/AIDS Awareness Day on February 7th. 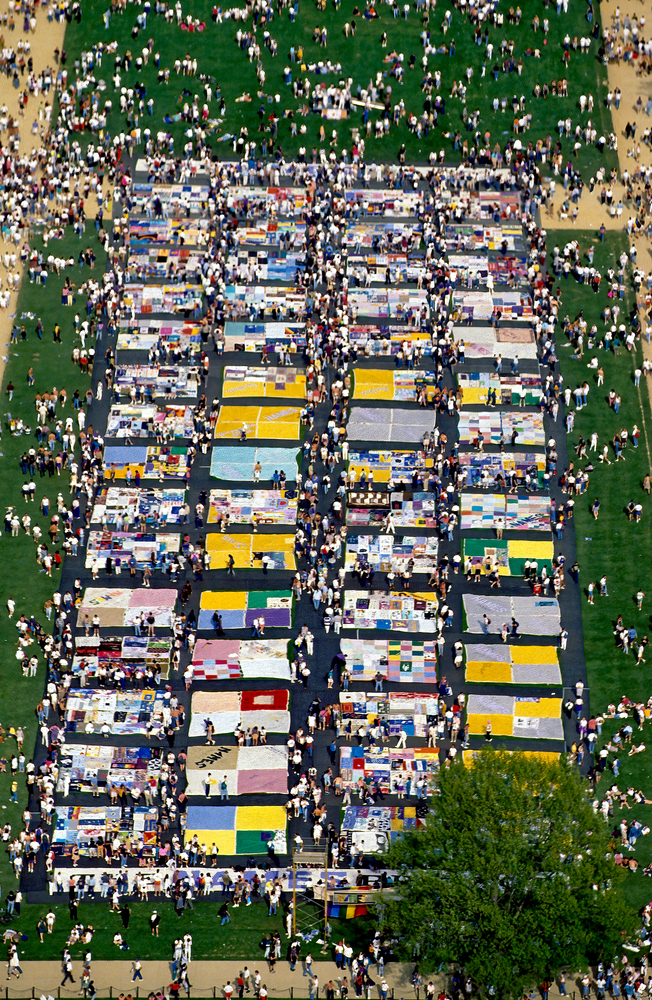 • Panels made as part of the Call My Name program, one of which honors Wandra, made by her hairdresser, who kept Wandra’s secret of being HIV-positive for 10 years, until her death. She wanted to honor Wandra, a neonatologist in Atlanta, who “had a life of accomplishment” noting that her friend loved to ski and watch ballet, “I wanted to honor that.” (Block 5788)

• Black celebrities – musicians, artists, designers, journalists – lost to AIDS, and, through their work and connection to people, brought awareness to the pandemic. A Quilt panel honors Sean Sasser, an AIDS activist who appeared on MTV’s The Real World: San Francisco, and who openly shared his relationship with Pedro Zamora, helping open hearts and minds to LGBT issues and those living with HIV/AIDS. (Block 5975) Another remembers the iconic “Sylvester” James, Eazy-E, Max Robinson, Author Ashe and Willi Smith, with records, CDs and photographs sewn onto it. (Block 5888)

• Black children who lost their lives to AIDS, including one panel that honors two year old Alexzandria that shows her photo, a teddy bear, Big Bird and a poem written by her mother Charlene, who says she pours her grief into the poems and stories she has been writing since Alexzandria died. “I can be angry about it, but instead I soothe myself with my writing.” (Block 2542) Another memorializes “Dougie,” who lost his life to AIDS at the age of eight. His mother lovingly made his panel, which includes a painting of him from a photo taken when he met musical artist Ice-T. (Block 2268)

• Several panels honor Black men who died of AIDS, including three that have military uniforms sewn into them to honor their service. (Block 5976) Another honors George Gramby, who spent the last decade of his life helping people overcome substance abuse, forming a program called “Beginnings”, which still operates today. For more than 25 years, the town of Morristown, New Jersey holds an annual day in his memory. (Block 5592)

The event is important because the HIV/AIDS pandemic has disproportionately impacted people of color. Despite common belief, the stretch of HIV spreads much further than just within the LGBTQ community. Even nonwhite heterosexual women are at higher risk than their white counterparts.

The AIDS Quilt was designed to raise awareness of the pandemic that so many chose to ignore. This event will hopefully bring new insights to raise compassion, allow mourning, and begin the process of healing.

For more info on the National AIDS Memorial, click here.

Rufus Wainwright Performs Online Concerts of 9 of His Albums!

More Americans Identify as LGBTQ Than Ever Before