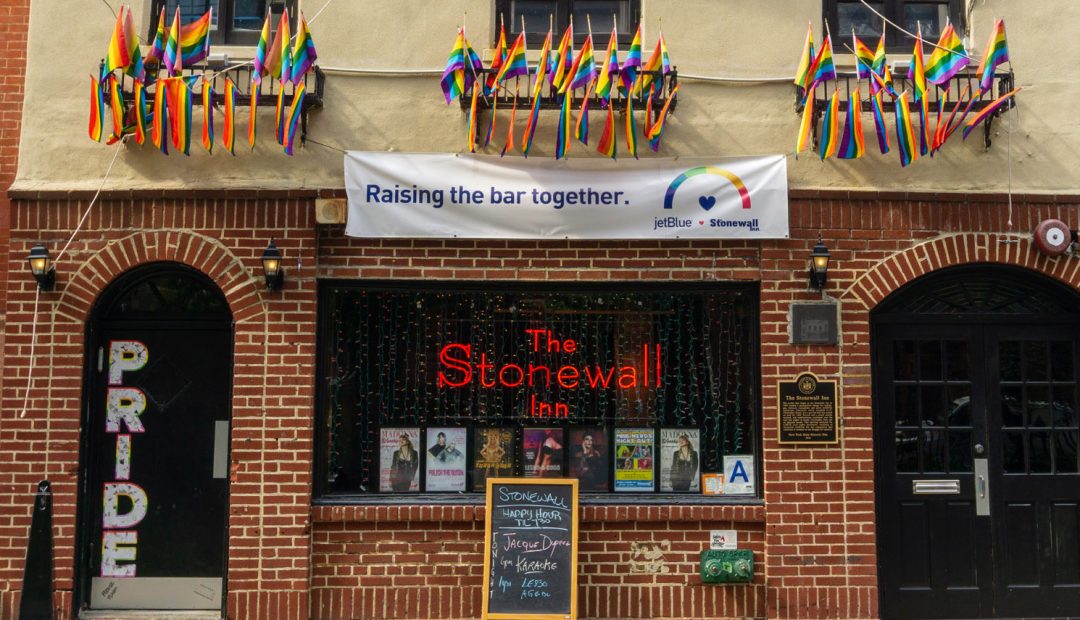 We’ve all heard the story of those pivotal events that took place at a New York City gay bar in the summer of 1969. What you might not know is the surprising events that took place after the notorious Stonewall Riots. As you can imagine, shortly after the riots the Stonewall was closed. A mafia-owned bar that was home to an uprising against cops wasn’t bound to last long.

Flash forward fifty years to the present day. I’m standing in Christopher Park with three members from the National Parks Conservation Association. It’s pouring rain and I’m completely soaked because I didn’t carry an umbrella. I stare the Stonewall Inn. The bright candy apple red neon sign glows like a signal of warmth and safety on such a dreary afternoon.

As the rain soaked through my shoes, Cortney Worrall, the regional director of the NPCA is telling me the unbelievable history of the Stonewall building. “After it’s closing,” she said, “the space the Stonewall once occupied became a temporary home to many different businesses (a bagel shop, a Chinese restaurant, a clothing store, another bar) until 1990. That’s when the modern Stonewall began to take shape. A new owner opened up a bar called New Jimmy’s at Stonewall Place. A few years later, the name was changed simply to Stonewall, a nod to the building’s important history. In 2006, the bar was purchased by its current owner who returned its name to the Stonewall Inn, and it’s been a popular gay bar for both New Yorkers and visitors ever since!”

It was so fascinating to me that we were standing on the exact same spot where the LGBTQ community had protested fifty years ago. “The way the streets are down here…” Cortney said, “They’re narrow, they wind and bend, they go in all directions. It made it impossible for the police to contain the uprising. Every time they’d block off one area, a new group of protesters would sneak in through another street. This entire area is now protected because the whole neighborhood is where the uprising took place.”

“How did you make that happen?” I asked. I knew the NPCA had spearheaded the campaign to make the Stonewall protected, but I had no idea how something of that magnitude would be achieved.

“Well,” she said, “most people don’t know this, but the National Park system is about preserving America’s history, and we believe in preserving the history of all Americans. We noticed that there wasn’t any preservation of America’s LGBTQ history, and we were determined to make that change. We at the NPCA aren’t governed by the National Park system, we’re a nonprofit, so the first step for getting the area protected was by rallying support from various organizations.”

When the Obama administration was in office, the NPCA saw their chance to make their vision a reality. They gathered groups together to discuss if Stonewall was the proper fit and the impact it would have, they created a petition, and then lobbied their case to the government. Then, in June of 2016, President Barack Obama declared the Stonewall Inn, and the surrounding area where the uprising took place, to be a National Monument, stating,

Something about standing in front of the Stonewall in the pouring rain seemed so fitting. For the LGBTQ community back then, so much of the world must have seemed like a dark and dreary place. Those letters –  STONEWALL – They must have seemed like such a beacon in the dark for so many who had to live in fear, depression, and anger. “I still can’t believe that this is where everything happened.” I said, “It seems so unreal.”

“Well,” Cortney replied, “That’s how we knew we needed to protect this area. It’s home to one of the most powerful events in this country’s history. It’s a very special place.”

The NPCA is also taking part in WorldPride to celebrate 50 years of the Stonewall uprisings (and coincidentally, it’s also the 100th anniversary of the NPCA). They’re taking part in 3 events during WorldPride:

~ You can listen to speakers from the NPCA at the WorldPride Human Rights Conference on June 24th.

If you can’t make it to WorldPride, but still want to visit the Stonewall National Monument during your visit to New York, you can download NPCA’s LGBTQ History Tour Map that’s loaded with lots of interesting info and top LGBTQ sights in the area. Also, since the Stonewall is now a National Monument, it has a designated park ranger. So keep an eye out for Stonewall’s friendly ranger!