According to Netflix, “our legal department is here, it’s queer, and it’s telling you to steer clear”. This statement was included in a cease-and-desist letter from the Netflix legal department to Super Happy Fun America (SHFA), the organizers of the ‘Straight Pride Parade’ planned in Boston on August 31st.

The streaming service gave SHFA 24 hours to remove its logo from their website before legal action would be taken. On the website for the parade Netflix is listed as one of 25 major corporations who are “prospective corporate sponsors” for the upcoming parade. Many of them have already rejected the organization and its hateful mission. The organizers have already been tied with white supremacy groups.

Corporations like Lyft, Ben & Jerry’s, Gillette, and Facebook have condemned the claims and asserted they are not, nor have they ever been in, negotiations to sponsor the ‘Straight Pride Parade’. But Netflix might take the cake with the best way of telling them to stop using their logo.

The letter, which was emailed to the organization’s leaders, was posted on their website earlier this week along with an interesting spin to it. The exchange was then posted to Twitter by journalist Ford Fischer.

Netflix wrote, “you are using the Netflix logo to promote your event, which despite its name is about hate–-not pride. That’s gross and deeply hurtful, but it’s also deceptive misinformation and infringes our legal rights. Netflix has nothing to do with your organization or event. Indeed, it’s telling that you feel the need to lie to gain legitimacy… You should know that we’re unafraid of bullies. Our legal department is here, it’s queer, and it’s telling you to steer clear”.

The response from SHFA was titled “Netflix Hates the Straight.  In their post they say, “sadly, we have learned that Netflix is a heterophobic company steeped in hatred and bigotry. They not only rejected our offer but threatened us with litigation if we did not stop using their name and logo, which is perfectly legal for editorial or informational purposes.”

They continue by saying that Netflix’s legal department “is staffed by gay supremacists who are so accustomed to privilege that our goal of equality for straights feels like oppression to them.”

This is the response that the “Straight Pride Parade” group says they sent to Netflix after being threatened with a potential lawsuit.

The SPP says they wanted Netflix’s support but never actually claimed to have it.

“Your hate will not stop us,” the SPP tells Netflix. pic.twitter.com/ZjUC86IqNH

Netflix is serious about legal action towards the group, but this letter was just a warning.

Earlier this month JP Morgan Chase, the investment bank, took action by attacking the website directly. According to a blog post by SHFA, their web host, Bluehost, informed them that the company filed a trademark infringement claim against the SHFA website.

After a refusal to remove the logo, claiming that they have a legal right to use a corporation’s logo for “informational purposes,” Bluehost suspended their site. Since then they have found a new web host that they say “respects free speech.” 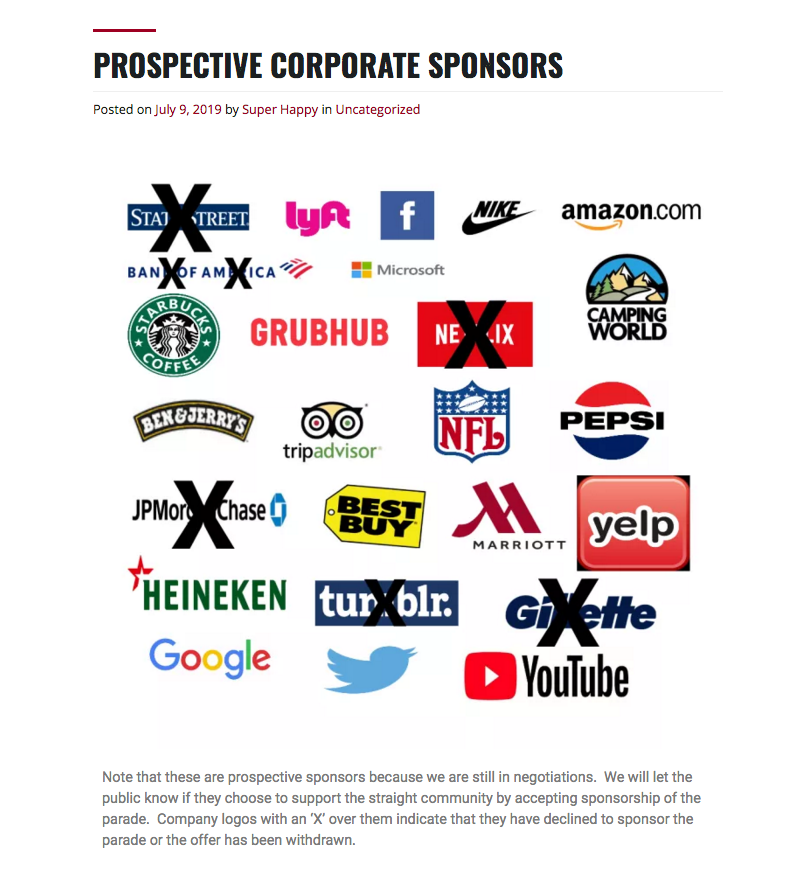 Lineup of “prospective sponsors” the group claims to be “in negotiations” with. (Screenshot of SHFA website)