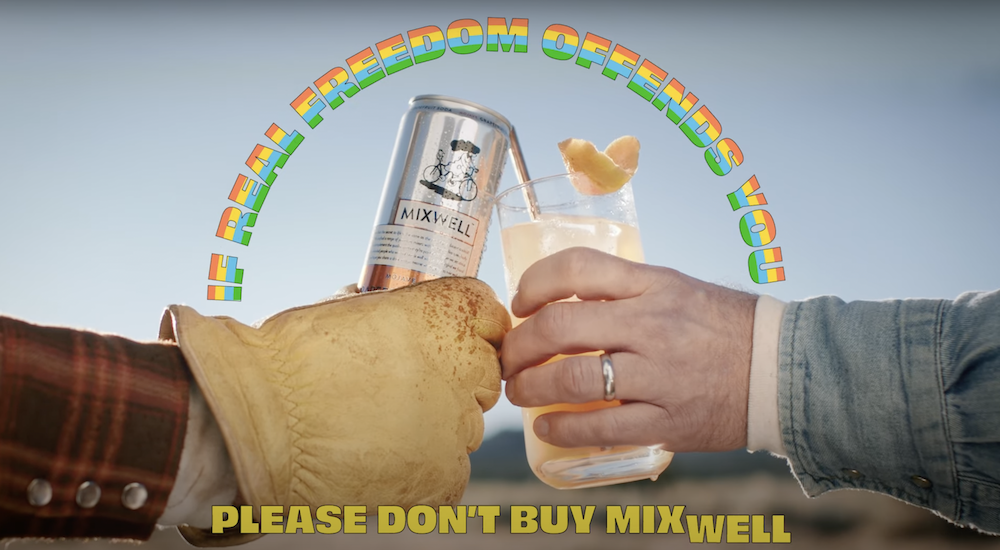 A new organically-made soda brand, Mixwell, isn’t shying away from showing its values. In their new ad, they blatantly make fun of the MAGA crowd by starting their commercial with a burly man in a truck complaining about needing to make America more manly again. The ad finishes by revealing that the man has a husband, and the two then embrace for a long kiss.

The spot concludes with the words “If Real Freedom Offends You, Please Don’t Buy Mixwell.” The ad is quick, witty, fearless, and completely hilarious.

The commercial very clearly mocks Trump-era America, which has seen a deranged and unfounded fear of LGBTQ people and a delusional belief that men have somehow become oppressed and have lost the ability to be their true manly selves. The commercial clearly mocks this fear of the “loss of masculinity” that Republicans seem to be so obsessed with lately.

According to Media Post, Jens Stoelke, the CEO of Mixwell, stated, “This campaign reinforces our core belief—that mixing, on every level, really does make the world a better place, and we want to make it clear to those who are actively perpetuating ideas that create turmoil or exclude and shame others based on their beliefs that this is not the drink mixer for you.”

Mixwell is more than just good advertising, its beverages are designed to be craft sparkling sodas, perfect for drinking over ice or mixing in cocktails. Current flavors include pure sparkling water, dandelion tonic water made with cardamom, grapefruit soda made with prickly pear cactus, and ginger ale made with Thai basil and lemongrass.

Mixwell can currently be purchased in select stores, or online. For more information, visit their website.

2021 Becomes Deadliest Year for Trans People in the USA