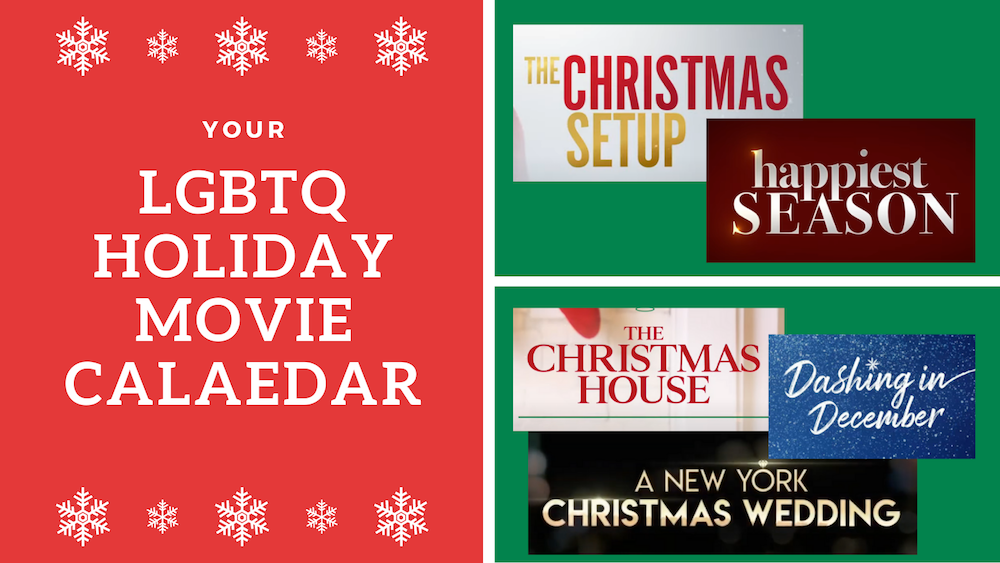 This year, Hollywood is offering a wonderful lineup of LGBTQ Christmas movies to make your holiday season jolly and bright. This new wave of inclusive filmmaking shows that Hollywood is making a real effort to be more diverse and share stories from various viewpoints. Better yet, portraying LGBTQ people in family-friendly holiday films helps normalize and destigmatize the gay community. It helps show that LGBTQ people are indeed  worthy of love, happiness, and a good dose of holiday cheer, just like everyone else.

A New York Christmas, which has just been released on Netflix, puts an LGBTQ twist on the famous film It’s a Wonderful Life (which itself was adapted from the short story, The Greatest Gift.)

The story follows a woman about to be wed to the man she loves…until she stumbles across her guardian angel late one night in Central Park. Her angel allows her to see what her life could have been if she had the courage to remain with her first true love, Gabrielle.

Hallmark Channel’s The Christmas House is about two sons who come home for Christmas. Their mother is determined to decorate their house to the nines, per Christmas tradition, and havoc ensues. One of the sons is played by openly gay actor Jonathan Bennett (made famous by Mean Girls) who brings home his fiancee. It’s one of Hallmark’s first-ever movies to feature LGBTQ characters.

Hulu’s highly-anticipated queer rom-com Happiest Season is about a lesbian who brings her girlfriend home for Christmas…the only problem is that she isn’t out to her family yet. One of the highlights of the movie is its all-star cast, including Kristen Stewart, Aubrey Plaza, Dan Levy, Alison Brie, Mary Steenburgen, Victor Garber, and more. The film was also directed by lesbian icon Clea DuVall.

In the film, Hugo heads home to Milwaukee for the holidays, but once he arrives his mom (Drescher) decides to play a little matchmaking between him and his high school crush. Hugo is forced to question what’s truly important in his life and what direction his future should take. It looks like the perfect offering to add to your Christmas watch-list. Plus, with Drescher involved, there’s sure to be a good dose of humor and fun along with way.

Dashing in December, which will simulcast on Paramount Network, TV Land, POP, and Logo on Sunday, December 13th, takes the classic holiday chick flick and turns it upside by adding an LGBTQ twist. When Wyatt returns to his rustic hometown for Christmas, he discovers a new, unexpected (and hunky) surprise. The film stars acting legend Andie MacDowell as well as Juan Pablo Di Pace.

Netflix Adds a Queer Twist to a Christmas Classic