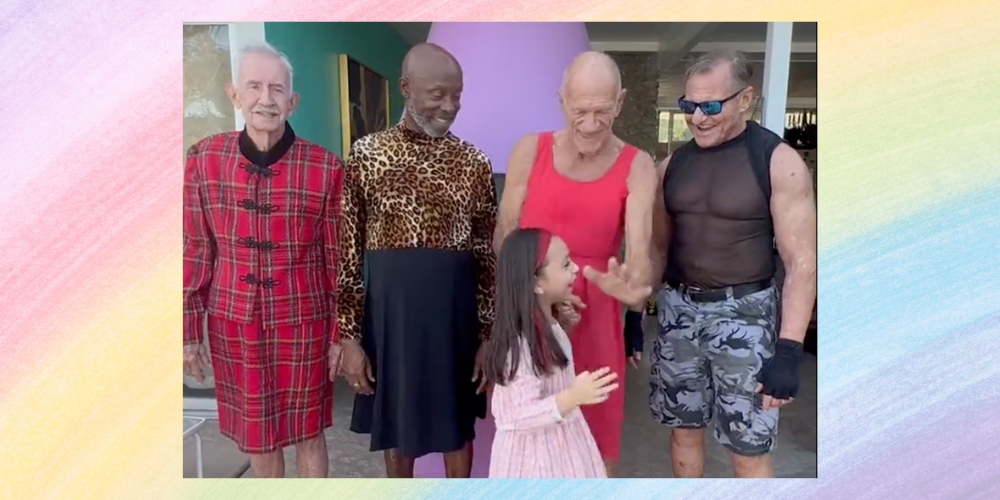 The ‘Old Gays’, a group of older gay friends who live life to the fullest, have become a social media sensations, amassing 4.5 million followers on TikTok and 306,000 on Instagram. Recently, they visited with a young fan, Evan, who is autistic and identifies as nonbinary.

In Evan’s own words he calls himself a “girlboy” and loves wearing dresses. In an NBC News article, his mom, Erica McLead, says that Evan is supported at school and at home, but that he never gets to see other people like him in the world. To fix that, the old gays dropped by for a visit, all wearing dresses of their own.

The Old Gays wanted to let Evan know that it’s ok to be different and special and that looking fabulous in a dress is fun for everyone.

In the same NBC News article, his mother stated, “We might change a few minds and a few hearts so that tomorrow’s world will be kinder and more accepting of other little Evans everywhere.”

The Old Gays also received some good news of their own recently. It was announced back in November that the group will be starring in their own docuseries that will focus on their professional lives as well as their private lives (they all live together in the same house). Ranging in age from 60s to late 70s, the Old Gays have been an inspiration for many around the world as they prove that people of all sexualities and ages can still have fun and make a splash.

In an interview, Mick Peterson (one of the Old Gays) said, “I have not always had a voice. This has given me an opportunity to really use my voice and to just not to worry about what people are thinking of me. For me, it really has been and still is quite the journey. I don’t know where it’s going, but right now I’m on cloud nine and I’m thankful to be a part of it.”